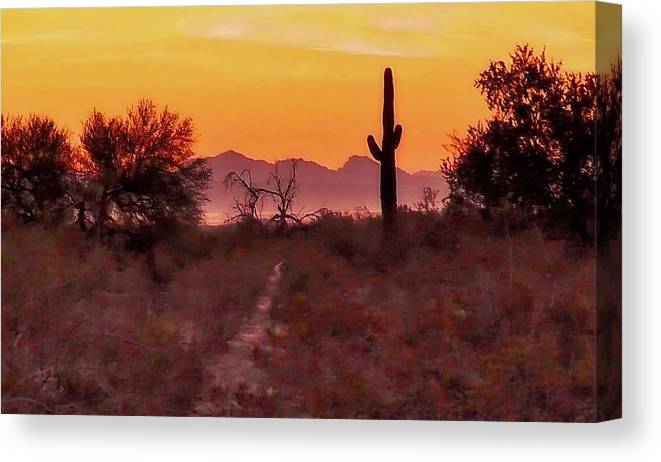 Desert Sunrise Trail canvas print by Judy Kennedy.   Bring your artwork to life with the texture and depth of a stretched canvas print. Your image gets printed onto one of our premium canvases and then stretched on a wooden frame of 1.5" x 1.5" stretcher bars (gallery wrap) or 5/8" x 5/8" stretcher bars (museum wrap). Your canvas print will be delivered to you "ready to hang" with pre-attached hanging wire, mounting hooks, and nails.

This photograph was taken in October of 2013 in the Sonoran Desert of Arizona about 50 miles south of Phoenix. During autumn in the desert, the... more

This photograph was taken in October of 2013 in the Sonoran Desert of Arizona about 50 miles south of Phoenix. During autumn in the desert, the early mornings begin to get much cooler. Also, harvest time is ending, and so the agricultural areas that lie next to wild desert produce a kind of dust that when mixed with the cooler air looks like a mysterious mist. This effect is accentuated in the early mornings and late afternoon. I was out hiking on BLM land (a federal agency in the United States that manages wild areas) next to my property on the “East Trail” just north of the Vekol Wash - a significant historical and ecological xeroriiparian habitat. The sun was just rising and making a beautiful silhouette of the iconic symbol of the American west — the great Giant Saguaro cactus. I love where I live!