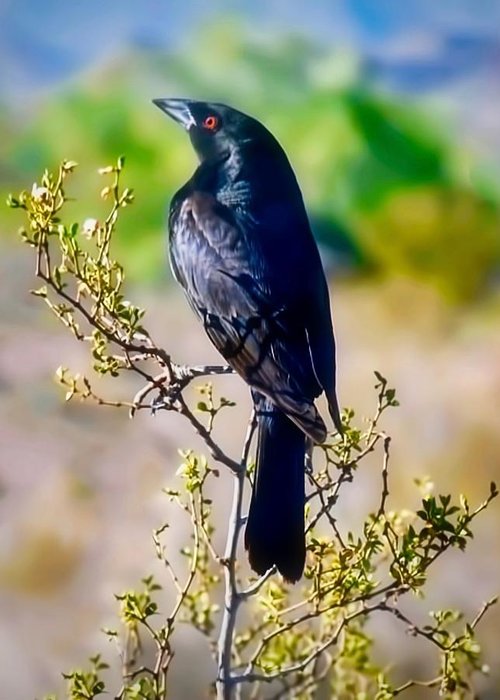 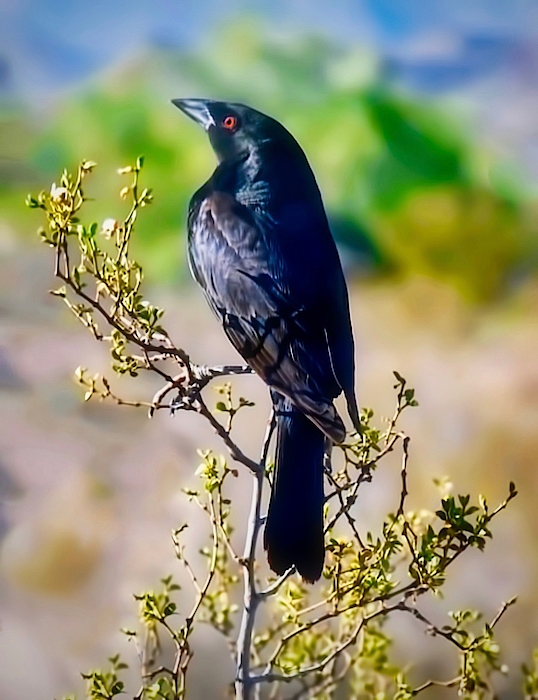 Type your message, above, and you'll see what it looks like on the inside of the card, below.

Our greeting cards are 5" x 7" in size and are produced on digital offset printers using 100 lb. paper stock. Each card is coated with a UV protectant on the outside surface which produces a semi-gloss finish. The inside of each card has a matte white finish and can be customized with your own message up to 500 characters in length. Each card comes with a white envelope for mailing or gift giving.

This is a male of this fascinating species (Bronzed Cowbird, Molothrus aeneus), because he has red eyes and iridescent plumage, unlike the female. ... more

This is a male of this fascinating species (Bronzed Cowbird, Molothrus aeneus), because he has red eyes and iridescent plumage, unlike the female. He was perched on a creosote bush (aka chaparral) probably in between his flamboyant courtship displays with sounds reminiscent of rounded water drops filling up a glass bottle. Both species of Cowbird (Bronzed and Brown-Headed) are brood parasites, meaning that they lay their eggs in the nests of other bird species, leaving the new parents to raise the cowbird chicks, often at the expense of their own offspring. This photo was taken on June 18, 2011, in the Sonoran Desert of Arizona about 50 miles south of Phoenix. Watch this video (Cowbird Love Triangle) about two rivals competing for a female: https://www.youtube.com/watch?v=1znquZuV4Jk&t=150s